The Moment I Discovered I Was An Empath

I watched him die.

I grew up in Dalzell, South Carolina. An adventure land of dirt roads, fields of corn, and my dad’s self-built log cabin.

Emotional intelligence wasn’t much for dinner table conversation in these parts, and the rare occasion you “small-talked” with the neighbors it was normally over huntin’, fishin’, work, or…well that’s it.

I tried to like huntin’ and fishin’. Little did I know then, I would never like it. I only tolerate it these days to bond with my dad. As a kid, not only was it boring but it just felt “icky”, sad and unnecessary.

I’ll never forget the day I watched him die.

My stepbrother was very into hunting. And fishing. So he was very hyped to go hunting by himself for the first time on our 12 acre lot.

Not too long after he trotted out to the deer stand with a rifle leaned against his shoulder, he came practically skipping back screaming:

I darted out the door, scurried down the brick steps, and sprinted past him, barefoot and full of determination. Why? I don’t really know. What I do know is that the only thing I could think about was getting to that deer as soon as I possibly could.

I hopped over the stream, ran up the hill, and saw it laying on the ground right where it had been shot by my brother. When I got to it, all I could think to do was lay with it.

This isn’t a piece on not killing animals. It’s more about the sadness I felt when I laid with the animal. I felt its chest, slowly moving up and down. I saw the blood. And I looked deep into its eyes. I saw light. A dim flickering light.

And then, there was just darkness. The light had left, and its soul flew away to wherever they fly. I laid there. Feeling incredibly empty. And I cried. I lay until I heard the footsteps of my family approaching to claim the prize.

Looking back, it’s the first time I remember consciously feeling the energy of another being. It made it that much more impactful because I also felt the energy of something disappear. I witnessed it become lifeless. In a way, it’s like I absorbed it. Which is pretty wild to think about.

These days I absorb energy like a Bounty roll in a pond. I used to not really understand what being an empath meant or how to use it to my benefit, but I’ve learned to treat my intense empathy as more of a superpower than a trait that holds me back. More on that another day.

I just thought there was something so special about that buck. I’ll never forget. 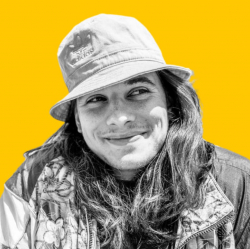 It’s Time To Cheat On My Couch

The Best Medicine For A Fresh, New Year – And A Conversation I Won’t Forget

Waiting Weekly To Watch Dexter is Killing Me

10 Things I Learned From My Three Long Term Relationships